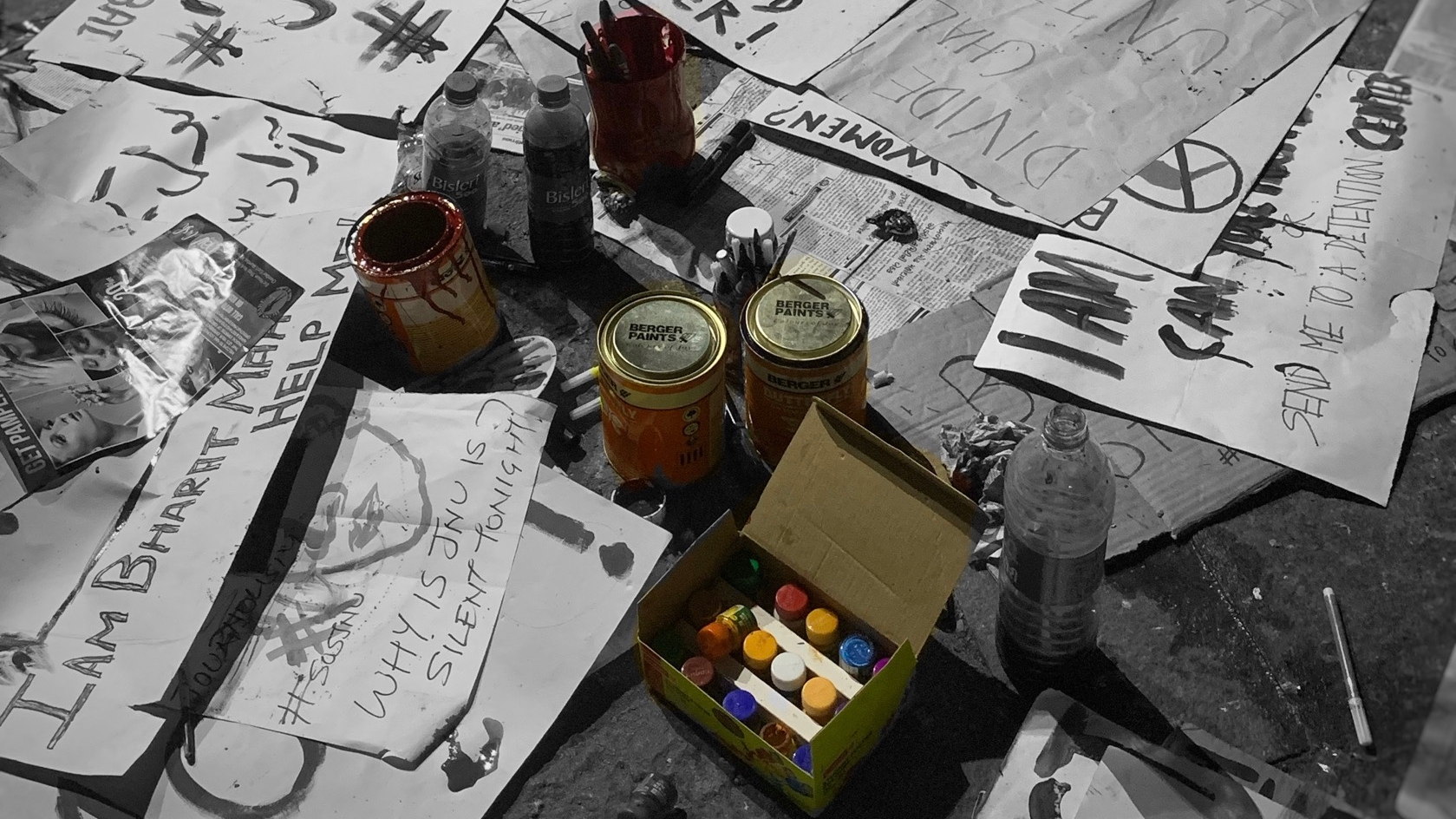 For this week’s episode of our podcast The Lit Pickers, Supriya and I chatted about the poetry we’ve heard at some of the protests against the triple whammy of Citizenship (Amendment) Act, National Register of Citizens and the National Population Register. (We’ve got another 10 episodes coming up on a weekly basis. Please fall over yourselves to subscribe on your preferred podcast platform.)

When we decided to record this particular episode, it struck me that songs of protest in Bengali were an integral part of the soundtrack of my childhood. I didn’t grow up in Calcutta, but wherever in the world we made our home, Bengali music, poetry and literature felt like the bricks that built it. I have clear memories of singing martial songs about breaking the shackles put on us my enemies as a child (while demanding Maggi because boss, independence means different things to different people. Don’t judge) and cheerfully humming under my breath lyrics about setting off to join a revolution (while waddling up to piano class). The poetry of protest was not something that got pulled out for an occasion. It was part of my childhood despite the fact that there really wasn’t much to rebel against (my parents were and still are rubbish at the autocrat routine).

My standard move when it comes to anything concerning Bengali literature is to turn to the aforementioned failed autocrats, so I gave my father some homework ahead of our podcast recording. Could he give me a quick overview of protest poetry in Bengali? Maybe include some dusty old male poets I’ve never read but have heard quoted in conversations; and quotes in writing please because the less said about my Bengali spelling, the better. “Sure,” my father said. “So you want to cover about 100 years? From 1870s to 1970s?” That, ladies and gents, is a quick overview according to my father: ONE HUNDRED YEARS.

At the end of all the remembering and rejecting, and my mother interjecting (“How can you ignore Tagore? Just because you have issues with his writing! That’s ridiculous! Also, that other guy, the old one, you know who I mean…”. The real miracle is that he did), my father thanked me for the homework. “You made me remember so many beautiful songs,” he said, and I could hear a little catch in his voice.

Here are a few of the poems and songs from Bengal that we remembered.

Rough translation: Who wishes to live without freedom? Who wishes to wear the chains of slavery? Those who are destroying themselves, they’re doing it to save the country.

I’m not going to translate everything because it’s well beyond my skill set. But this one from Hemchandra Bandopadhyay begins with a plea to forget the differences of caste and religion, and to stand up as opposition. The poets I’m mentioning here are all men, mostly of upper caste and Hindu, which tells you a lot about who got recognition. Silver lining: at least these men used their privilege to attack prejudices and to imagine an equal society.

And now for Dwijendralal Ray.

There are many renditions of the first poem, which was sung famously by his DL Ray’s son, but somehow none of them have the same kind of rousing thunderousness that I remember from when I’d hear (and sing) it as a child. DL Ray is one of the people who searched for an Indian identity in Hinduism (he imagined India as a land of Aryans, for instance) and would in later years get a lot of love from the Hindu Right. It’s worth keeping in mind that the enemy for DL Ray is always the colonial British government.

Moving on to Kazi Nazrul Islam, who was all sorts of amazing. This version of his famous song “Karar oi Louho Kopat” (“Break those prison gates”) was used in a film and while I’m not crazy about either the arrangement or the *stunning* acting, I do like the male chorus. You can hear how well Nazrul used the sound of syllables and consonants (the hard t-s, the emphasis that you can hear the strong ka and pa sounds). These were poems that were written to be spoken or sung, not just read.

Similarly, you really need to read this one by Charankabi (Mukunda Das) out loud. (No surprise that he was a folk theatre guy.)

On to Dinesh Das.

I’m not sure why, but there’s something about this poem that really appeals to me. I think it’s the fact that he privileges the sickle — the tool of the poorest agricultural labourer — over the bayonet and bombs that were not just signs of the establishment’s might, but also a certain brand of Western, industrial progress as well as the war machine.

In the podcast, I mentioned a poem by Sukanta Bhattacharjee. These are the lines I was referring to:

The poem that I refer to in the podcast that likens the full moon to the scorched roti is the one above.

And of course, Salil Chowdhury, whose “Pathe Ebar Naamo Saathi” I mentioned in the podcast. The song that practically every Bengali (of a certain age) remembers when they think of Salil Chowdhury and protest, though, is this one

Supriya spoke about Shailendra’s “Tu Zinda Hai“. The tune was composed by Salil Chowdhury and Shailendra originally wrote it for Bombay Youth Choir. Later, the same tune with different lyrics from Shailendra would be used for the opening credits of Mem Didi.

At some point, I hope my father will actually sit down and write an essay on the protest poetry that he remembers and inherited. At some point, I hope many of you will sit down with your parents and others of that generation, and ask them to remember the words that filled their hearts and gave them strength.

In the meanwhile, here are a few more things to hear and read alongside today’s The Lit Pickers episode.

Supriya wrote a wonderful column on protest poetry, which you can read here. She’s also written about the poetry of Subramania Bharti, or Bharathiyar, here.

Coke Studio had a lovely version of “Hum Dekhenge”, and you can read about Faiz Ahmed Faiz here.

I doubt I need to remind you of Varun Grover’s “Kaagaz Nahin Dikhayenge“, but there it is. The musical version is here.

And finally this is the poem from the gent at #OccupyGateway, who raised the slogan, “Hum tera jhooth giraenge”. If you know who the poet is, please let me know.

There are a couple more videos of the poetry and performances from the first night of #OccupyGateway here.

See you on the streets.

One thought on “Protest in verse”